MFO will be celebrating our 9th birthday in style at the PS Art Space in Fremantle on May 22nd.  On the night we will be joined guitarist Tim Jago who used play in the band until he moved to Miami for further study and general awesomeness – he is just visiting from the USA for a short time.  It will be great to get out some of the charts that Tim used play on – What About Jed?, Jelly Belly etc.  There might even be a guitar shred battle between Tim and Harry!

We will also be joined by new Perth jazz/rock band – FAT SPARROW featuring Luke Minness, Ricki Malet, Harry Winton, Karl Floreson and Greg Brenton.  Their debut gig at The Ellington the other night was so great!

We are all looking forward to this one!  Don’t forget the door prizes! 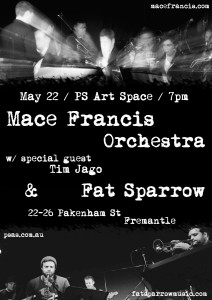 No shows booked at the moment.

You can find all my music for listening and purchase through Bandcamp.

You can contact me for bookings or any project related communications by emailing me.

This week's #3Questions is with audio engineer nin

This error message is only visible to WordPress admins


Error: API requests are being delayed for this account. New posts will not be retrieved.