At the start of 2019 I put together a swing band called The 950 Local. This is an 8-piece band that plays music specifically for swing dancers and Lindy Hoppers. We have played at The Mustang Bar and the Duke of George and a few other venues around Perth. This band has also expanded to The 950 Express which is a 15-piece big band version of the smaller band.

The 950 Express has been playing a monthly residence (the last Thursday of the month) at a new venue in Fremantle called Freo.Social. This night, called Freo.Speakeasy, is a night dedicated to learning swing dancing and dancing along to the swinging repertoire of Count Basie, Duke Ellington, Jimmie Lunceford and Benny Goodman. We will be back starting January 23.

We finished our year at the Quarry Amphitheatre playing our 11th year of Jazz on the Rocks. Here is the great swinging tune Deed I Do from Ella & Basie featuring Lucy Iffla on vocals.

I have been a little lax with the website posts – oops! A couple years between drinks, but a lot has happened since the last post.

The most exciting being a new MFO recording called Love Songs I Love. This is an album of five of my favourite standards, this time available as LP, CD and Digital Download. I have always wanted to have my own LP and this cover looks amazing in the LP size! … very exciting. Please check it out on BandCamp and order a copy! The Music Mill was built and was a huge success! There were a few moments were I didn’t think we would get it finished but many people pulled together and helped to make it a success!

You can follow the journey, progress and the final Leederville Festival outcome HERE on The Music Mill Facebook page.

A huge thanks to Makoto Oka for the idea and trusting me with it – we did it! Also thank you to my Japanese friends and Music Mill supporters Tomoka Kai, Chihiro and Fumihiko for travelling to Perth.

Also a massive thank you to Edith Cowan University for awarding me a Collaborative Enhancement Grant. To Ken Allen and Jimmy Murphy for believing in the idea enough to feature at the Light Up Leedy Festival.

Then there are the people who helped with building the beast – all the help was really really appreciated – no matter how large or small. A big thanks to David Pinkus for the workshop space and to Adam Cruickshank for the CNC cutting… and then in no particular order Gabrielle Sherwood, Dan Sherwood (and Bear), Greg Sherwood, James van de Ven, Andre Junior, Wayne Slater, Ricki Malet, Alex Benn, Sam Hadlow, Nick Pages-Oliver, Gregory Brenton, Stuart James and Andrew Greenham.

…and finally all the people who gave so generously to my GoFundMe campaign!!!

THANK YOU!!! and I am looking forward to the next time!

I have been a bit absent from this website recently, no blogs, no gig posts… bad website owner! The reason has been because it has been a crazy busy year… lots of gigs, teaching and fun projects including The Music Mill.

This has been a project that goes back a few years when I randomly met Makoto Oka at a bar in Japan called Bar Chit Chat. We got talking, over about 40 highballs, about music and our current projects. I spoke about my site-specific research and he talked about his Music Mill Project which used the old water wheels in Japan to power his automated sound sculpture. Since that time in 2014, I have been to Japan several times to help Makoto with his Music Mill and perform with it at two festivals in Ehime and Iwate Prefectures. Who says you can’t still meet nice men in bars? Haha!

What is The Music Mill? I hear you say…

The Music Mill is a solar powered sound sculpture made up of many automated musical instruments: glockenspiel, marimba, tuned pipes, snare drum, bass drum and cow bell. Each instrument is manually programmed through the use of pins and lift arms to create different melodies and rhythms. It is like a giant kids toy which brings joy to small and big kids! Here is a photo of th eone that has evolved over the years in Japan… 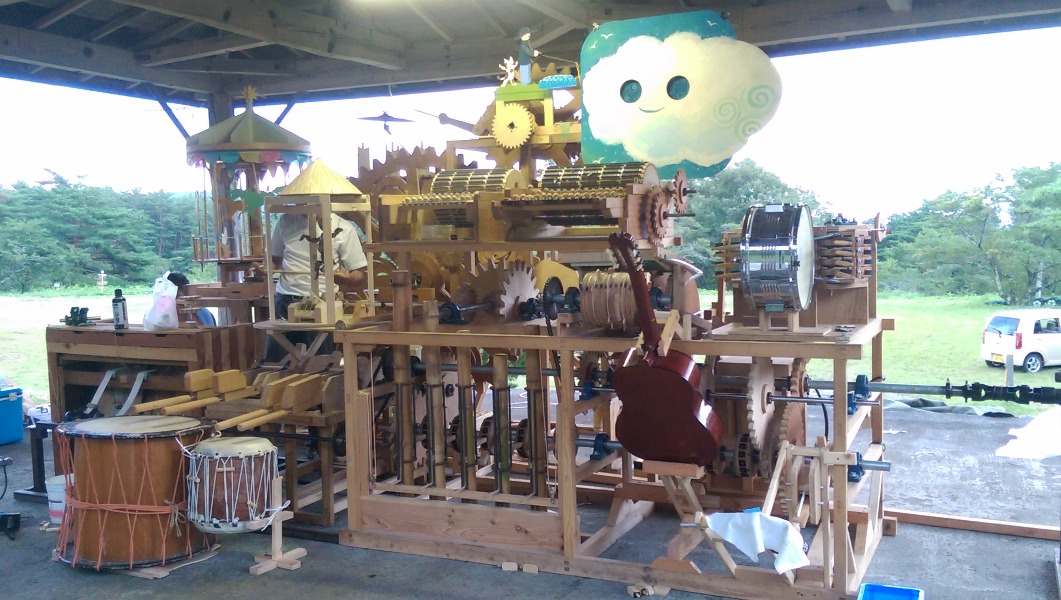 I have been helping Makoto to create one in Japan over the last few years and now I would like to build one in Perth.

What I love about The Music Mill is the purely analogue way you create music with it. The whole process of the music making is visible – the motor turns the gears which lifts arms and beaters, which then hit instruments to create joyus sounds. While it makes music by itself it is also fun to play along with. Here is Makoto and myself playing along with the Japanese Music Mill at the Tobigamori Festival in Iwate Prefecture in Northern Japan. 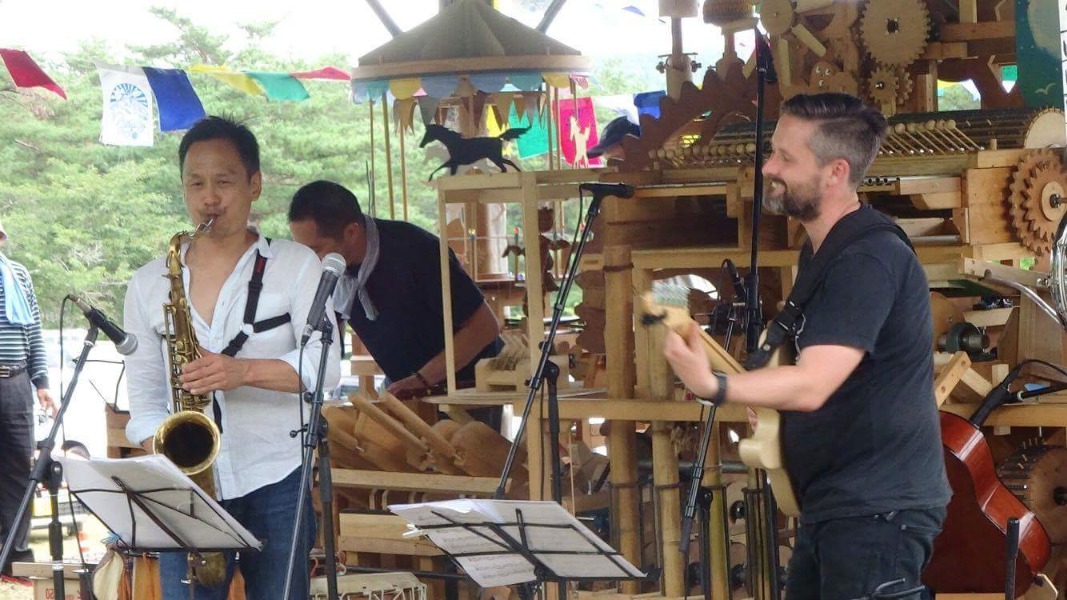 I am looking to raise funds to help me build this beast! Your generous support will go to purchasing materials, instruments, specialist tools, expertise labour and flying Makoto out to Australia. I have set up a Go Fund Me page (below) and I would be super super thankful for any contributions as it will help make this dream machine come true. 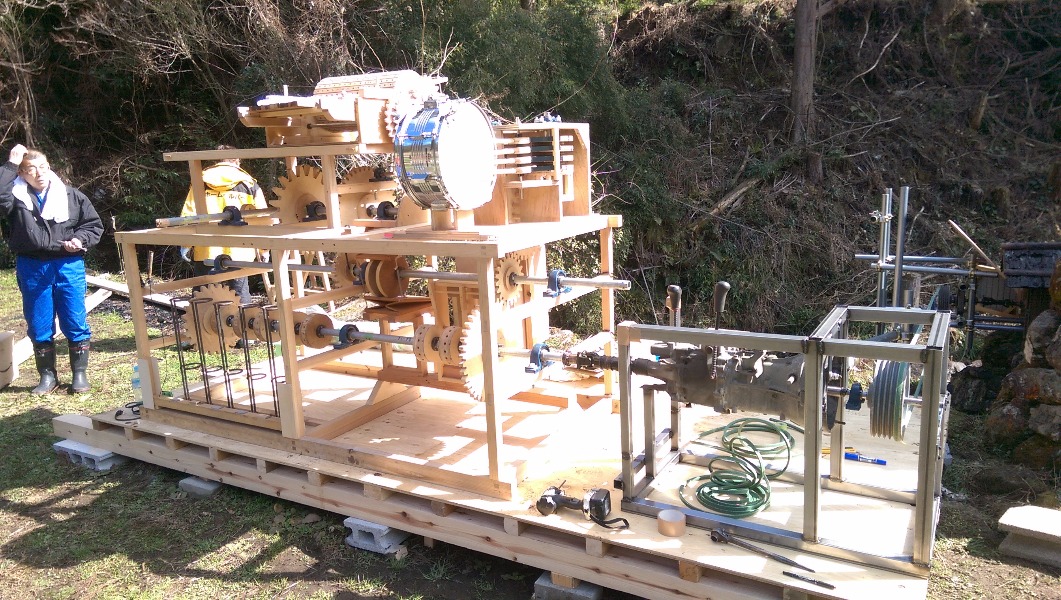 If you are unable to give financially but are handy with building things, please make contact. I will need all the help I can get!

Hi. It has been quite a while since posting and so much has happened! 2015 & 2016 have been very kind to me and I hope the fun times continue!

I finally graduated for PhD studies – officially Dr Mace now. It was quite a journey and I learnt a lot, but boy I am glad that is over! The thesis is published online HERE and you can listen to the music I created as part of the project. A huge thank you to my supervisor Cat Hope for getting me through,  even if it was kicking and screaming sometimes!

I was also very honoured to be awarded the Faculty of Education and the Arts Research Medal for best Masters and PhD graduate of 2015. Super exciting! Not bad for a kid that almost failed year 12 English! Take that Belmont High School! I got to play dress ups to celebrate! It was both a surprise and an honour to find out that I was the recipient of the Jazz Work of the Year award at the 2015 APRA/AMCOS Art Music Awards for my recent MFO recording – Music For Average Photography. An absolute honour to be in the company of musical idols of mine, Paul Grabowski and Simon Barker as well as good friend Daniel Susnjar. I would like to thank APRA /AMCOS for the award an recognition of the hard work that went into the composition process and the recording. I would also like to say a huge thank you to the band for, again, bring my music to life and making the process so enjoyable!!! I love you guys! It is hard to believe that MFO has been together for 10 years. We had our very first gig in April 2005 at the Lazy Susan Comedy Lounge – a small room with theatre seating and bean bags all over the floor. A great fun room where we played every month for almost a year. A great way to start the life of a new band. I am really proud that I have been able to keep the band actively playing, touring and recording over these 10 years. The longest we have gone without playing a gig was five moths, which happened just a few years ago while in the middle of my PhD. I guess I just lost track of time!

We celebrated our 10th birthday on April 30th 2015 at The Ellington Jazz Club. A super fun gig! The band played great and it was such a fun vibe! As it was my party, I made sure that I fulfilled a long time dream of playing trombone in a big band! I have a feeling I didn’t get the gig, but it was a lot of fun trying! Me struggling with the 2nd trombone part! Talking a whole lot of rubbish – no doubt!

It has all been such a blast! – the 4 national tours, the 6 CD recordings, the tons of original music and countless gigs. Each band member has bought their own unique voice to the band and steered it into a different direction – all the musicality, time and dedication has been incredible! I love you all. A special heart felt thank you goes to Ben Collins, Ricki Malet, Greg Brenton and Mark Sprogowski for sticking with the band the whole 10 years! Amazing! A dream come true! I feel so lucky to have you all as my musical family!

We will be continuing to celebrate throughout the year by performing on the first Thursday of the month at The Astor Lounge in Mt Lawley. The first one being on June 4th. Please come and celebrate with us!

Hi – It has been a long time coming but MFO is ready to release their 6th album called Music For Average Photography. We recorded this at the end of last year at Loop Studios with Kieran Kenderessy and with the help of our wonderful pozible supporters was able to create an album of new music which I am really proud of. The idea of creating 10 short “songs”, rather than a few epically long compositions is a departure from my usual composition aesthetic, but I really enjoyed the process of creating these shorter compositions and making sure I needed to say what I wanted in a shorter amount of time. Each piece, except 2, features a single soloist at their very best!

Each “song” is really different and was inspired the very average photographs which are featured in the CD booklet.

We will be launching this album soon…

MFO will be celebrating our 9th birthday in style at the PS Art Space in Fremantle on May 22nd.  On the night we will be joined guitarist Tim Jago who used play in the band until he moved to Miami for further study and general awesomeness – he is just visiting from the USA for a short time.  It will be great to get out some of the charts that Tim used play on – What About Jed?, Jelly Belly etc.  There might even be a guitar shred battle between Tim and Harry!

We will also be joined by new Perth jazz/rock band – FAT SPARROW featuring Luke Minness, Ricki Malet, Harry Winton, Karl Floreson and Greg Brenton.  Their debut gig at The Ellington the other night was so great!

We are all looking forward to this one!  Don’t forget the door prizes! Here is the Redcoats live version of Wolf Like Me with my horn arrangement mixed very quietly under the band.  It is a pretty cool song!  Enjoy

You can find all my music for listening and purchase through Bandcamp and the Listen/Hear Collective.

You can contact me for bookings or any project related communications by emailing me.